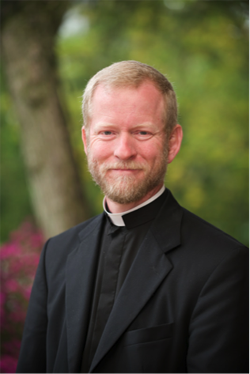 Rev. Dr. Tadeusz Pacholczyk currently serves as the Director of Education at The National Catholic Bioethics Center in Philadelphia and directs the Center’s National Catholic Certification Program in Health Care Ethics. He writes and speaks widely on bioethics and medical ethics. He is a priest of the diocese of Fall River, Massachusetts. Since 2001, he has given several hundred presentations and invited lectures, and participated in debates and roundtables on contemporary bioethics throughout the U.S., Canada, and Europe.

He has taught bioethics classes at Holy Apostles College and Seminary in Connecticut, St. John’s Seminary in Boston, and the Catholic University of America in Washington, D.C. As an undergraduate Fr. Tad earned degrees in philosophy, biochemistry, molecular cell biology, and chemistry, and did laboratory research on hormonal regulation of the immune response. He later earned a Ph.D. in Neuroscience from Yale University, where he focused on cloning genes for neurotransmitter transporters which are expressed in the brain.

He worked for several years as a molecular biologist at Massachusetts General Hospital/Harvard Medical School. Father Tad studied for 5 years in Rome at both the Gregorian University and the Lateran University, where he did advanced work in dogmatic theology and in bioethics, examining the question of delayed ensoulment of the human embryo. He has testified before members of the Massachusetts, Wisconsin, Virginia and Oregon State Legislatures during deliberations over stem cell research and cloning.

He writes a monthly newspaper column on bioethics that is nationally syndicated to more than 30 diocesan newspapers in the U.S., which has also been carried by newspapers in England, Poland and Australia. He has written articles for various national publications including the Wall Street Journal and the Dallas Morning News. He has done numerous media commentaries, including appearances on CNN International, ABC World News Tonight, NBC Nightly News and National Public Radio.