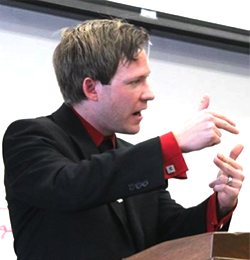 Professor Jacob W. Torbeck, M.A., O.P. is a Lay Dominican theologian specializing in systematic theology and ethics.  In 2012, he was granted a Master of Arts degree in theology from Aquinas Institute of Theology in Saint Louis, Missouri, the Dominican studium for the central and southern provinces for the Order of Preachers.  He is currently a doctoral student studying theology in Chicago, IL.  His conference presentations and published work have focused on the use of religious themes in virtual worlds, and the intersection of phenomenology with issues in Christian spirituality.

“Digital Re-enchantment? On the Theological Textuality of Virtual Worlds” given April 2015 at Theology and Pop-Culture: Escapism or the Really Real? Theta Alpha Kappa panel at Loyola University, Chicago, IL.

“‘The Woman Problem:’ Methodological Concerns in the Catholic Feminism of Edith Stein.” given June 2013 at the International Association for the Study of the Philosophy of Edith Stein Conference, King’s University College, London, Ontario.

“Empathy and the Fiat!: Marian Vulnerability in the Writings of Edith Stein” given February 2012 at the Edith Stein Project Conference, Notre Dame University.