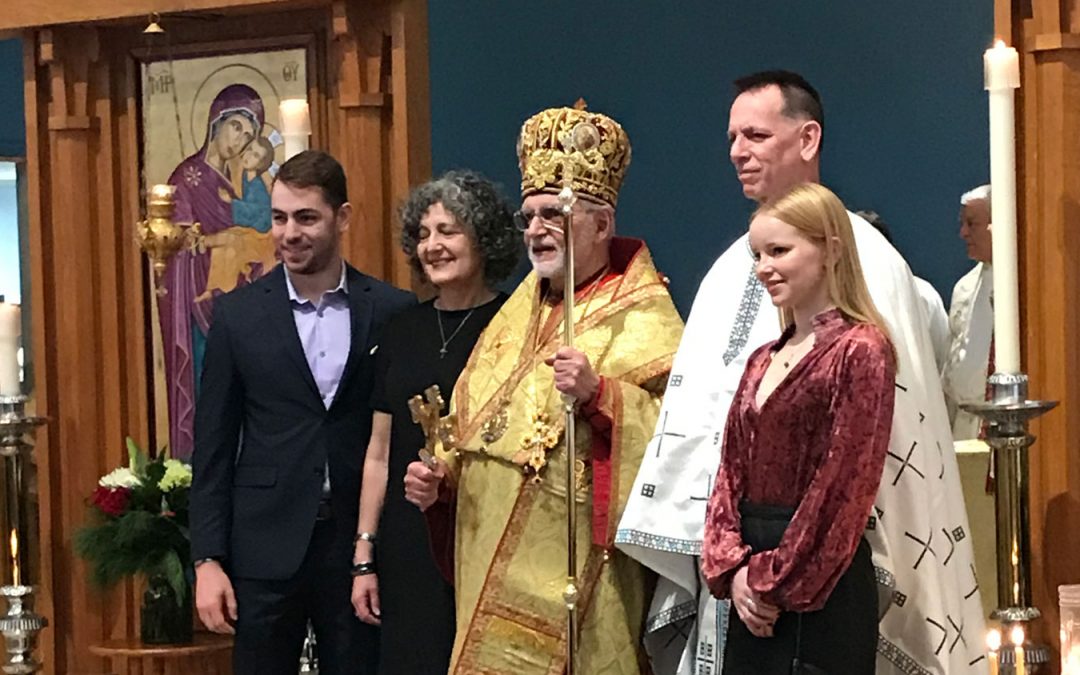 Saint Ann Melkite Catholic parish in Danbury, Connecticut, welcomed one of their own as their new pastor on December 1stwhen Deacon Tom Davis was ordained to the holy priesthood by the Most Reverend Nicholas J. Samra, Eparchial Bishop of the Eparchy of Newton. Fr. Tom has served St. Ann as a deacon since 2004.

Saint Ann Melkite Church is a Byzantine Rite catholic community. It has been well known presence in Danbury since 1910. “The second 100 years of Saint Ann are off to a great start,” Fr. Tom says. “We are going to preach the Apostolic faith in season and out, in the Temple and in the streets. We are going to bring in the people to be partakers of Divine nature and share in the banquet of the Lord.”

Fr. Tom is married to his wife of 31 years, Joanne Fatse Davis. They have three children, Thomas Gregory, Julia, and Sophia. Fr. Tom credits his mother’s faith and prayers for his own vocation. She was a determined Irish-American mother of seven children who taught persistence and perseverance by her example of steadfast family loyalty. When she died in 2016 she left a letter addressed to her seven children reminding them that they had the good fortune to be baptized into the Apostolic faith, and they would be called to account for their stewardship of so great a gift.  “Mom taught us all to have a special devotion to the Blessed Mother and that opened a lot of doors for me to see the maternal and nurturing side of the church.”

When asked why he is so enraptured with the faith Fr. Tom was quick with reply: “Because I believe Jesus Christ rose from the dead.”  As to why he chose the priesthood he was similarly direct: “It is God who chooses. When He calls it’s a lot like falling in love, like when I met and fell in love with my wife. Once bitten, nothing was ever the same.” He describes the Christian faith as a fantastic drama in which dogma is the climax. “God became man so that we might be divinized and share in His life for eternity. That’s as awesome as anything gets.”  That’s why he recommends the advice of the great British apologist and writer G.K. Chesterton: “Let your religion be less of a theory and more of a love affair.”

Fr. Tom has served as an assistant attorney general for the State of Connecticut for the last 28 years. Before that he served as an assistant corporation counsel for the City of New York and practiced law in Stamford, Connecticut, where he was born and raised. He graduated from Fordham University with a Bachelor of Arts in Political Science in 1978 and the Quinnipiac University School Law with a Juris Doctor degree in 1981 where he was the Lead Articles Editor of the Law Review.  In 1988 he received his Master of Laws in Trade Regulation from New York University School of Law.

Fr. Tom is the founder and president of the Liberty Institute for Faith & Ethics (L.I.F.E.) (liberty4life.org), a multidisciplinary center dedicated to the study of critical cultural, legal, and bioethical issues. “The Liberty Institute embraces the ethos of love and liberty at the heart of revelation and natural law,” says Fr. Tom. “It explores topics like religious liberty, freedom of conscience, medical and research ethics, the bio-technological revolution, the nature of the human person, the structure of society and the natural family and so much more.” That may sound like a mouthful, but Fr. Tom says it all boils down to basics. “Freedom is at the center of the Gospel message. We can choose love or we can refuse love. St. Paul says it best: ‘for freedom Christ has set us free.’” (Galatians 5:1) So it comes down to the choice. It’s like ancient Knight who waited centuries for Indiana Jones to reach his hidden lair in The Last Crusade and who cautioned ‘Choose, but choose wisely.’ It’s a timeless message with the timeless promise of eternal life. It will be the pleasure of my life to celebrate the Divine Liturgy and the sacramental economy for the amazing community of Saint Ann.”